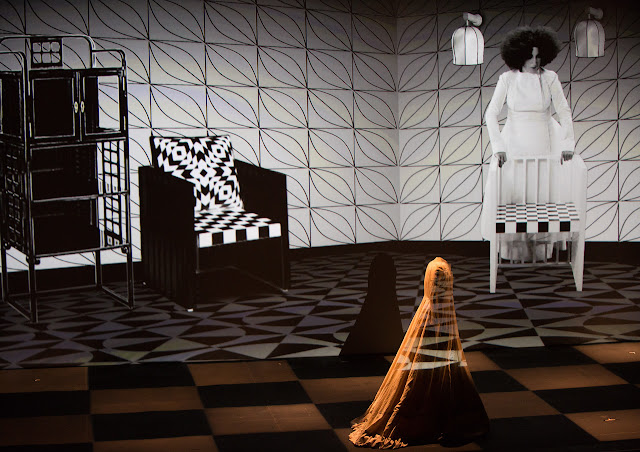 In 1889, the journalist Elizabeth Jane Cochrane, better known by her pseudonym, Nellie Bly, embarked on an unprecedented voyage: a trip around the world meant to span just 72 days. She had pitched the idea to her editor at the New York World, wanting to beat the fictional record set by Phileas Fogg, the protagonist of Jules Verne’s 1873 Around the World in 80 Days. The paper’s business manager initially said he preferred to send a man — Bly would have too much stuff to carry alone, he argued — but Bly fought him, won her trip, and then published a book detailing her adventures.
This famous exchange serves as the point of departure for Traveling Lady, an ambitious performance by Colombian-born artist Jessica Mitranithat celebrates female defiance while taking a tongue-in-cheek approach to examine the societal expectations of women today. Mitrani has presented Traveling Lady multiple times since 2014, and this most recent showing occurred earlier this month as part of the Dallas’ Symphony Orchestra-led SOLUNA Arts Festival, a week-long event of performances by local and international groups.
A mixture of a film of black-and-white animations interspersed with live, on-stage appearances by actress Rossy de Palma, its narrative form is intriguing, even refreshing. But it seemed at times too unanchored to Traveling Lady‘s message, with scenes and transitions sometimes so abstract and dotty they simply left me with a furrowed brow.
Mitrani recounts Bly’s tale during the first five minutes of the 45-minute-long performance, which is simply illustrated by black-and-white, animated collages, filled with checkered patterns inspired by Bly’s coat. From then on, Traveling Lady divides into chapters that explore the ways women navigate between different identities society has imposed upon them. The animations present de Palma in a kitchen, in an asylum — nodding to the historical ties between women and hysteria — and, in another scene, she is holding a tub of cold cream — to signify women as objects of desire, needing to continuously appear youthful. Quips abound about a woman’s place in the world and current gender dynamics, sometimes boomed by a narrator in the film and sometimes played over a speaker and lip-synced by de Palma, who appears sporadically on stage against an animated backdrop. One that garnered strong laughter from the audience: “Why is it, that when a man travels, he has luggage, but when a woman travels, it’s baggage?” But other lines seemed too far-out or simply too esoteric, such as de Palma’s recitation of a passage from Gertrude Stein’s Ida: A Novel, which Mitrani intended as a meditation on how women can travel through language.
It’s perhaps because Mitrani drew from so many different sources that Traveling Lady feels so fragmented and ultimately perplexing. Stein is one of 72 artistic sources she drew upon (one for each day of Bly’s travels); others include Louis Bourgeois and Josef Hoffman, whose architecture inspired some of the film’s animated settings.
What helps, somewhat, to deliver the performance’s girl-power message are a few recurring props that serve as echoes of Bly’s journey. Bly packed light, carrying in a small bag some clothes, slippers, and a jar of the aforementioned cold cream. This bag, a copy of which de Palma totes from time to time, becomes a flagrant metaphor for the emotional burdens women bear from societal pressures; the cold cream, a symbol, of course, of commercialized beauty standards. It comes to life in one memorable scene to complain about how stressful it is to be a cold cream, with a “mission to defy aging.” Fashion collective ThreeAsFour also designed three different versions of a Victorian dress, each voluminous and extravagant in their own way, to make visible the physical constrictions of period clothing. One even becomes a character, waltzing on stage as an eight-foot-tall dress that dancer Jordan Morley commanders.
Ultimately, it’s the characters of Traveling Lady that maintain the performance’s delight, from the anthropomorphized objects to its star, de Palma, whose dramatic facial expressions are simply captivating. The animations, unfortunately, as creative as they are, are clumsy translations of Mitrani’s ideas about women’s boundaries and freedoms. The performance seemed to want to encourage women to travel through life beyond gender, but it largely ended up dwelling on common gender stereotypes, offering little to inspire.
Traveling Lady took place at the Morton H. Meyerson Symphony Center (2301 Flora Street, Dallas, Texas) on June 1.